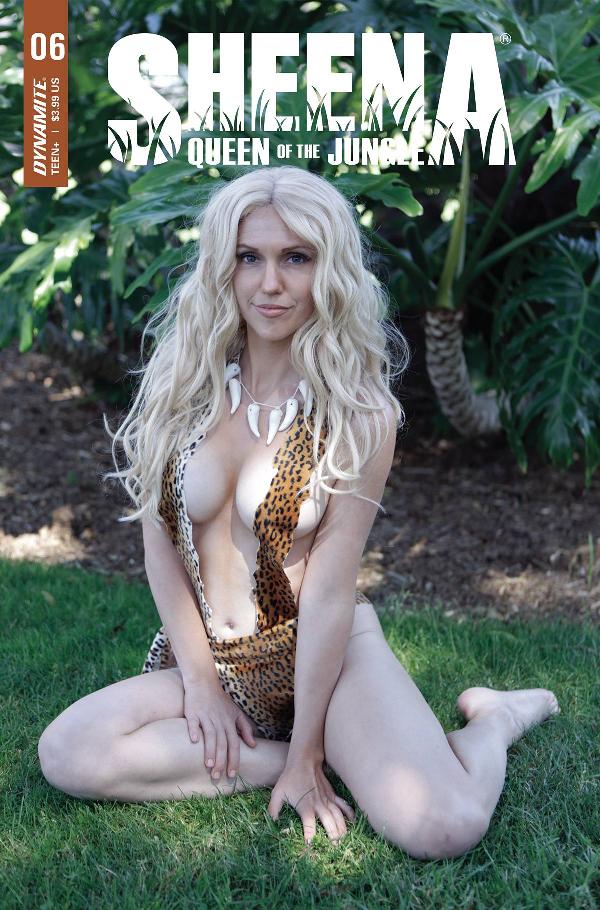 The adventures continue! After surviving the dome (spoiler alert), writer Steve de Souza (just check out all those credits at the end of this hype!) takes the reins as Sheena faces a new set of challenges: Higher education and a trip to the remnants of the Cenozoic Age?
Artist Jethro Morales continues to illustrate the adventures of Sheena, while returning cover artist Lucio Parillo, Arthur Suydam, Joseph Michael Linser and stunning new cosplayer Jackie Goehner round out the most thrilling adventure comic on the racks!

"The art here is terrific and beautiful. There is a visual distinction of the concrete jungle and the actual jungle. The two places look different while using the same art style. That boils down to detail. The glass in the buildings look real just as the leaves on the trees are equally defined" - Comic-Watch.com

Among the handful of screenwriters whose films have earned over $2 billion at the box office, Steven de Souza was introduced to Hollywood on cameraa contestant on an L.A. game show. There, the Philadelphia-based writer for PBS, The New York Times, Premiere, and other media outlets won a car and a color TV-and then talked his way into the office of several producers to leave behind some writing samples. A contract with Universal Television as a story editor was the result. From there, he moved into producing Knight Rider (1982), then earned his first film credit on 48 Hrs. (1982). That film, along with Commando (1985), Die Hard (1988), and Die Hard 2 (1990) established his reputation as a writer who could juggle both action and humor. That combination remains evident in all of his subsequent work, which expanded to include science-fiction (V, (1984), The Running Man (1987), Judge Dredd (1995)), horror (Tales from the Crypt (1989), Possessed (2000)), and fantasy (The Flintstones (1994), Cadillacs and Dinosaurs (1993), and Lara Croft Tomb Raider: The Cradle of Life (2003)).
He has been nominated two times each for the Edgar Allen Poe award for best mystery screenplay and the Saturn award for best Science Fiction/Fantasy Film. In 2000 he was honored with the Norman Lear Award for Lifetime Achievement in writing.

"Just to say received my order today. Vampire and Werewolf chess set is beautiful! And was a very speedy delivery and very securely packed. Will definitely be recommending to friends and buying things from you again. Thanks very much"