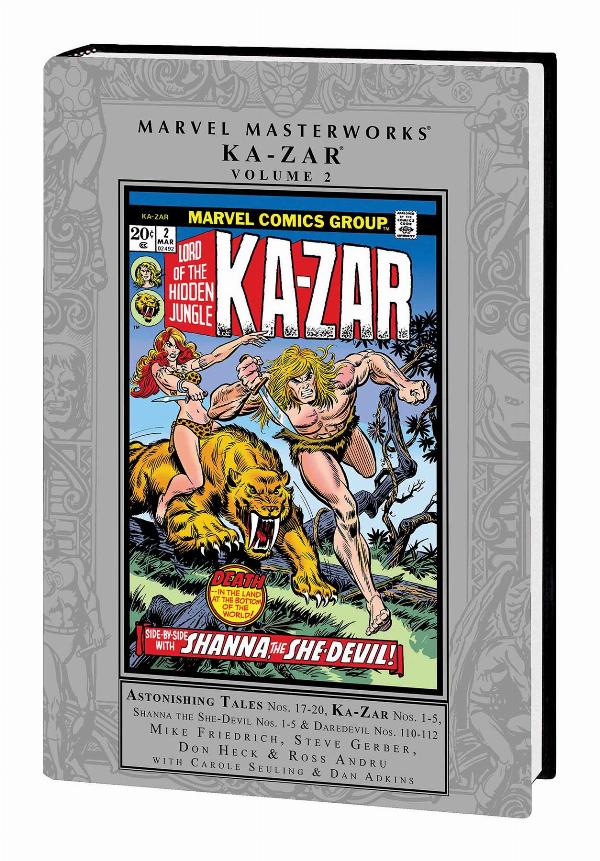 Ka-Zar meets Shanna for the first time in this massive Marvel Masterworks! Two heroes from separate walks of life - but it was inevitable that their paths would cross deep in the jungle after both rejected the modern world. But first, Ka-Zar must conquer a madman powered by Super-Soldier serum, the twin villain Gemini, and his own brother, the Plunderer - while Shanna hunts her father's killers, explores the jungle's mysteries, and battles the Mandrill and priestess Nekra! As their paths diverge, Ka-Zar encounters an evolved incarnation of a Savage Land nemesis in adventures with Bobbi Morse, the S.H.I.E.L.D. agent known as Mockingbird! Meanwhile, Daredevil helps Shanna complete her quest to avenge her father! Collecting ASTONISHING TALES (1970) #17-20, KA-ZAR (1974) #1-5, SHANNA THE SHE-DEVIL (1972) #1-5, DAREDEVIL (1964) #110-112, and material from DAREDEVIL (1964) #109 and MARVEL TWO-IN-ONE (1974) #3.
Rated T

"I have received my order in absolutely wonderful time. I wanted to get a present for my dads fiancee and she loves things like gothic-gifts. When I opened the goblets I didn't realise just how beautiful they are! The journal also was absolutely stunning! I know for a fact that she will love this! Thank you."

"Hi there, received my grim reaper tea light holder today and had to message you to say it's absolutely awesome!!! My fella will love it as I bought it for a birthday present, thank you for the fast delivery, used you a couple of times and never been disappointed !! Great customer service, take care and I'm sure I'll be ordering again very soon. "